Another very traditional block, the Ohio Star.  But unlike the other blocks I’ve made so far, which have just used two fabrics (plus the background), this time I’m adding a third fabric: 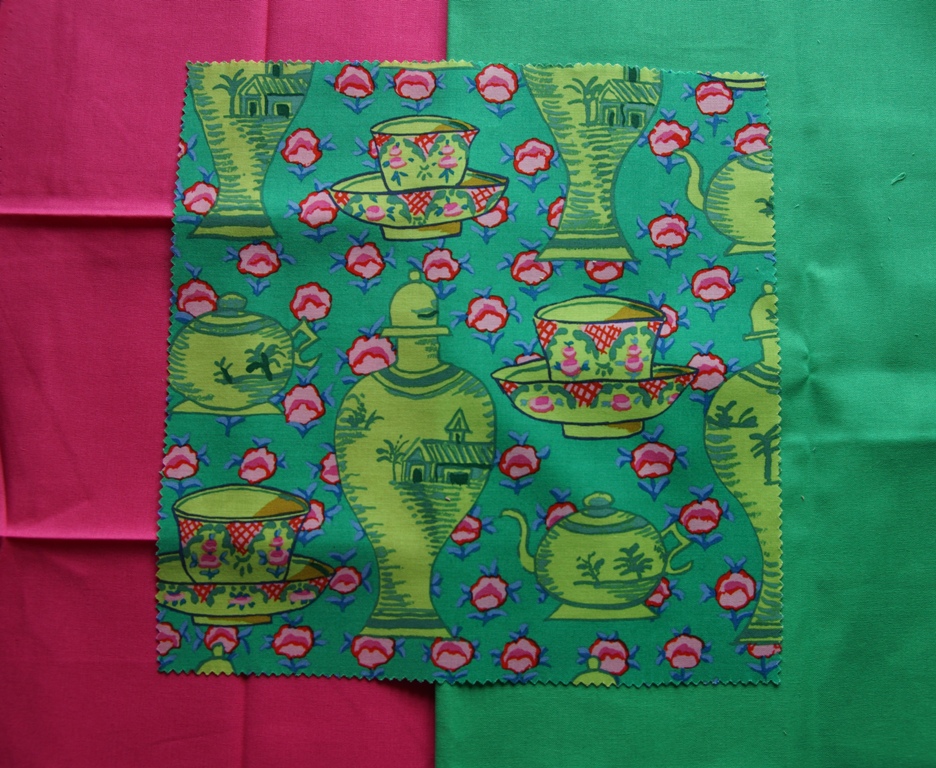 Technically you can make an Ohio Star with just two colours (or even one, if you kept the central square the same as the points), but I think it looks much better with three.

Pair one green* square with the pink* square, and the other with the large background square.

(*Obviously, you don’t have to use green and pink – I just can’t be bothered writing “solid 1” and “solid 2” every time.  If the fact that your colours are different than mine is too confusing for you, possibly quilting is not the craft for you…)

This is another way of making half-square triangles.  It only makes two at a time, which actually works out nicely for this block, and also doesn’t end up with bias edges on your block like the four-at-a-time method.

Draw a diagonal line across each pair (the line doesn’t show up very well in the photo, but I could see it pretty clearly in person), and stitch quarter of an inch either side of the line. 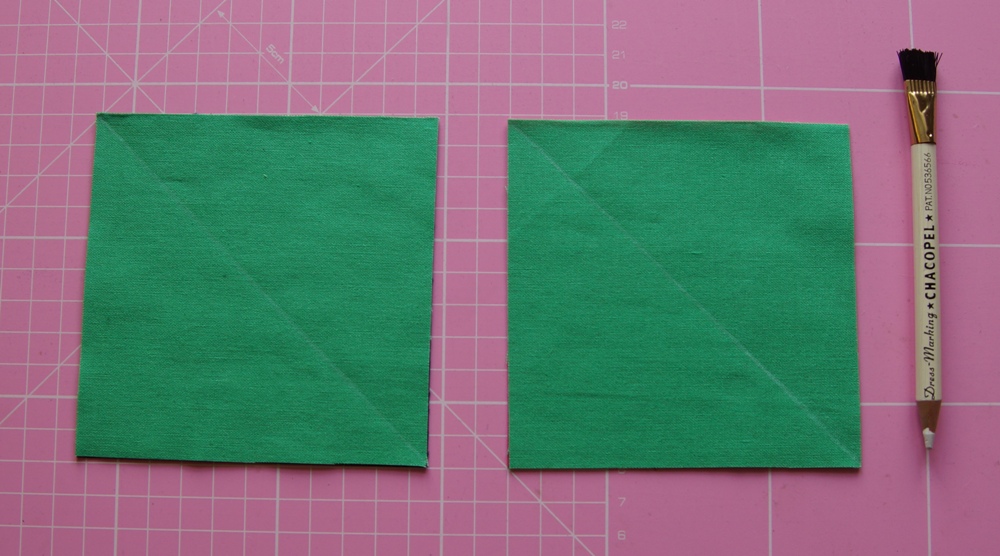 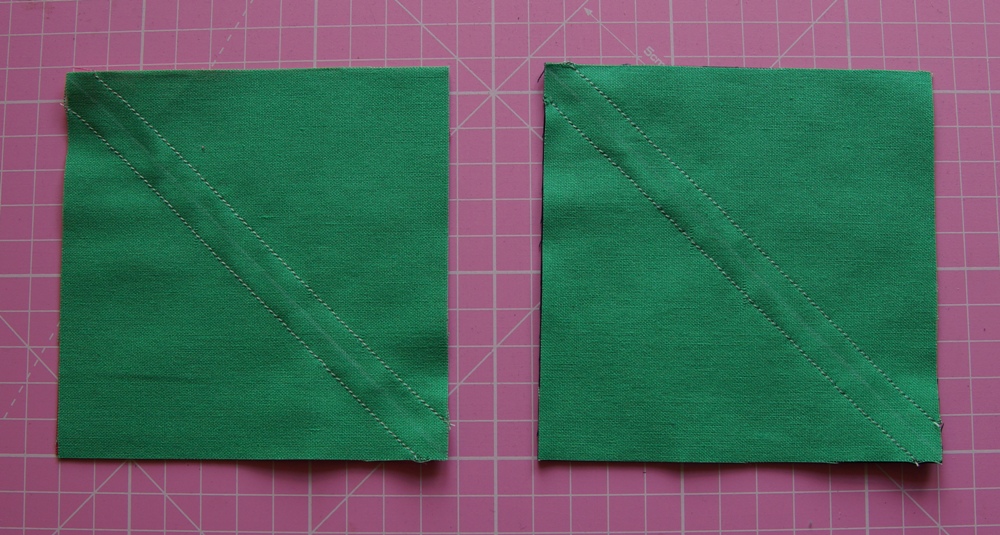 Cut along the drawn line and iron open, to get two half-square triangles of each colour combination. 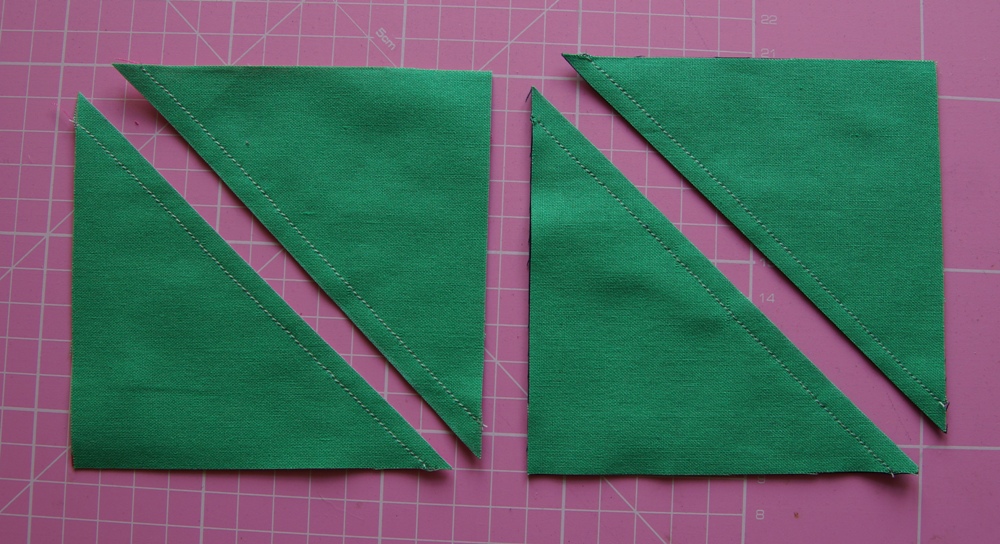 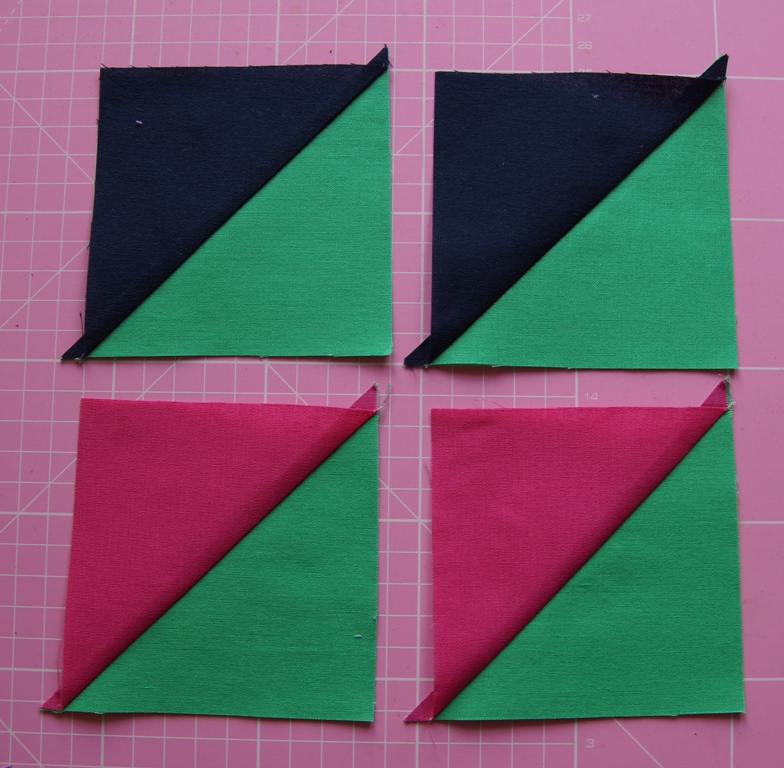 Now take each green/pink HST, and pair with a green/background HST, with the diagonals running the same direction, and the green on opposite sides. 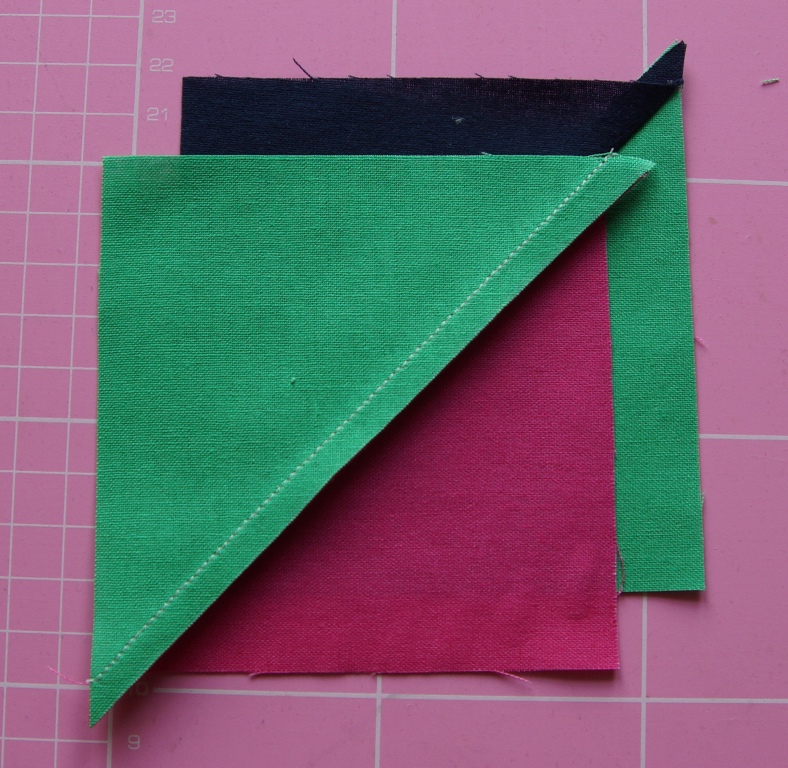 Draw a diagonal line in the opposite direction, and sew quarter of an inch on either side of the line. 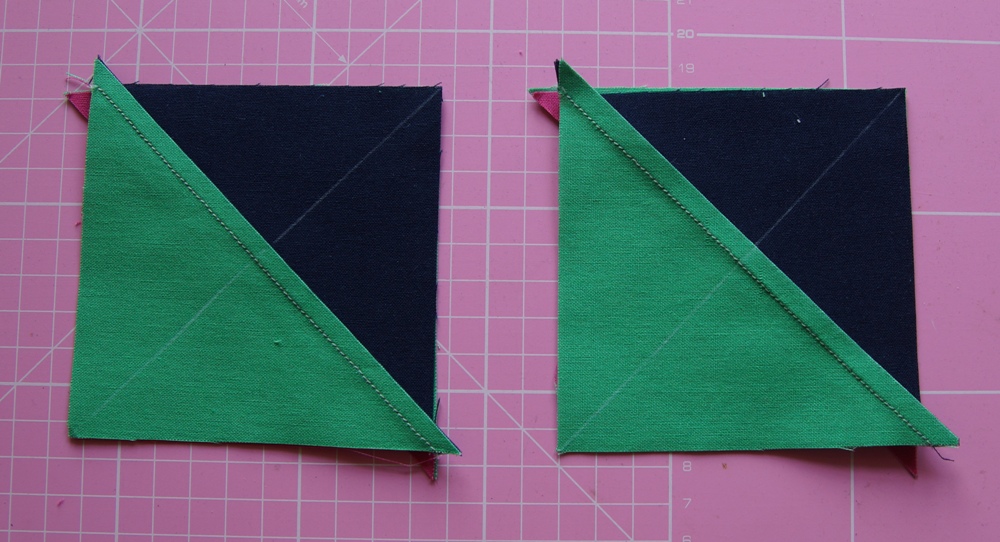 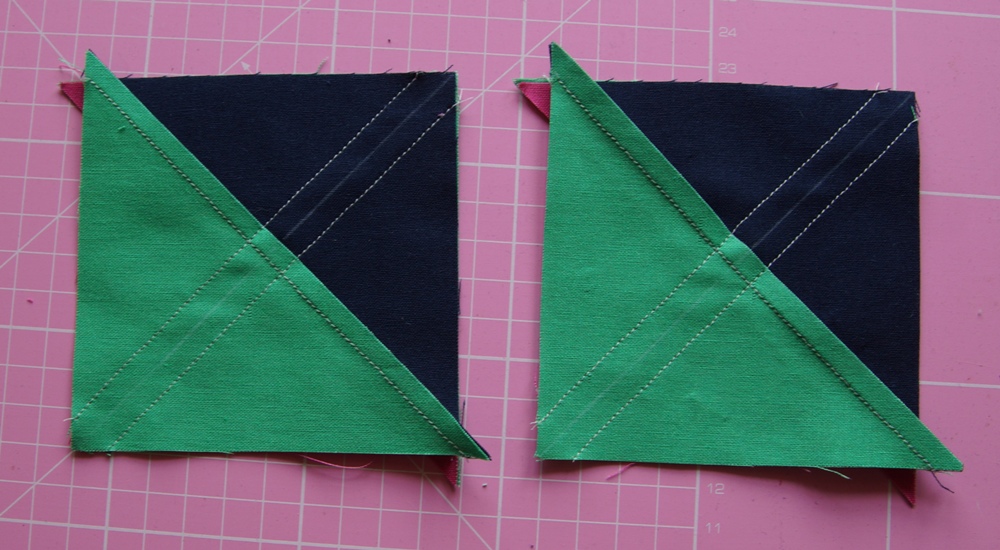 Cut along the lines and iron open, and you’ll have four quarter-square triangles. 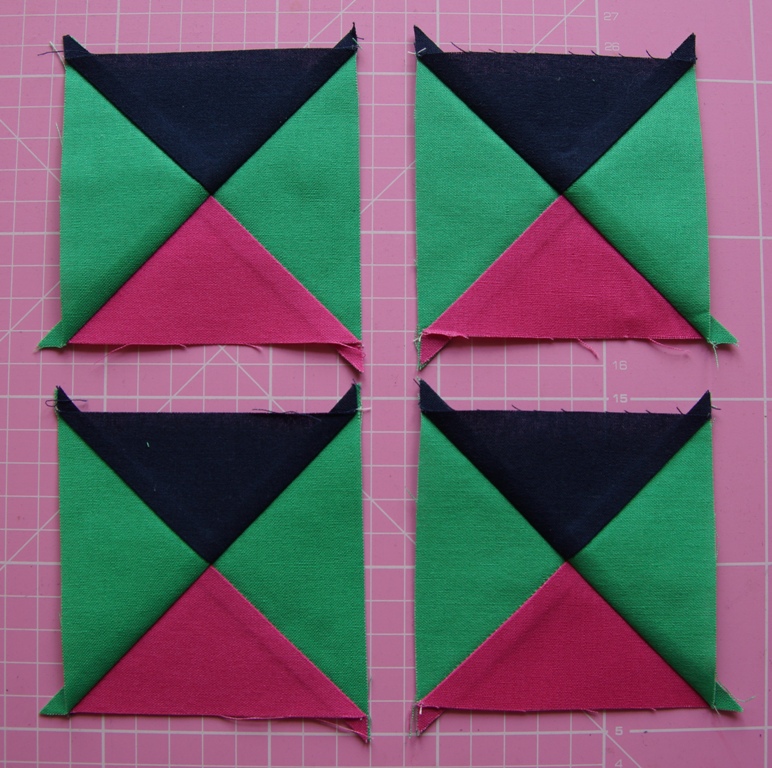 The quarter-square triangles should end up 3 1/2 inches square.  Trim off the dog ears, and lay out the block. 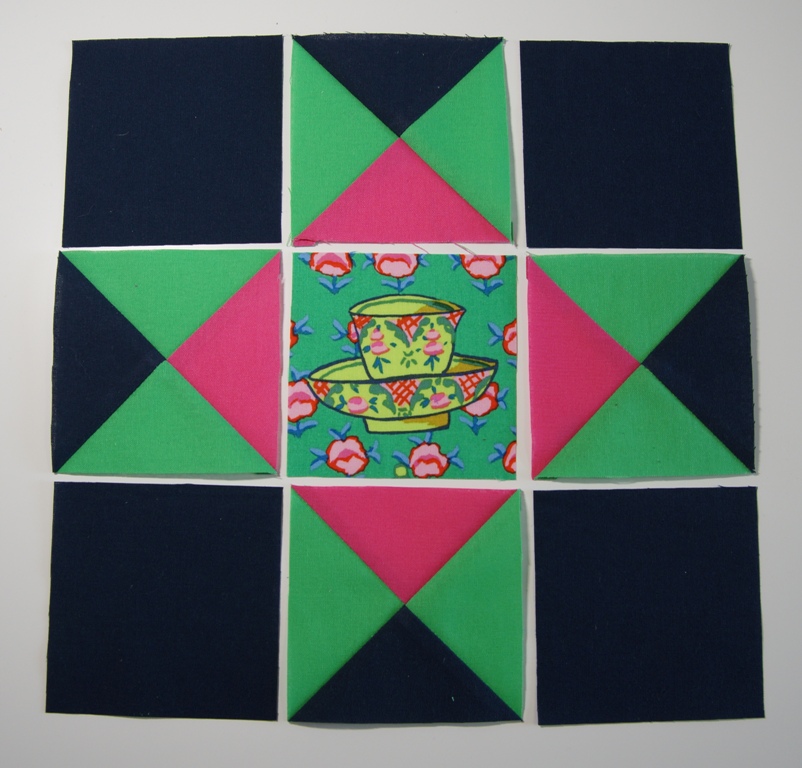 Sew together as a nine-patch, and you’ve got your Ohio Star. 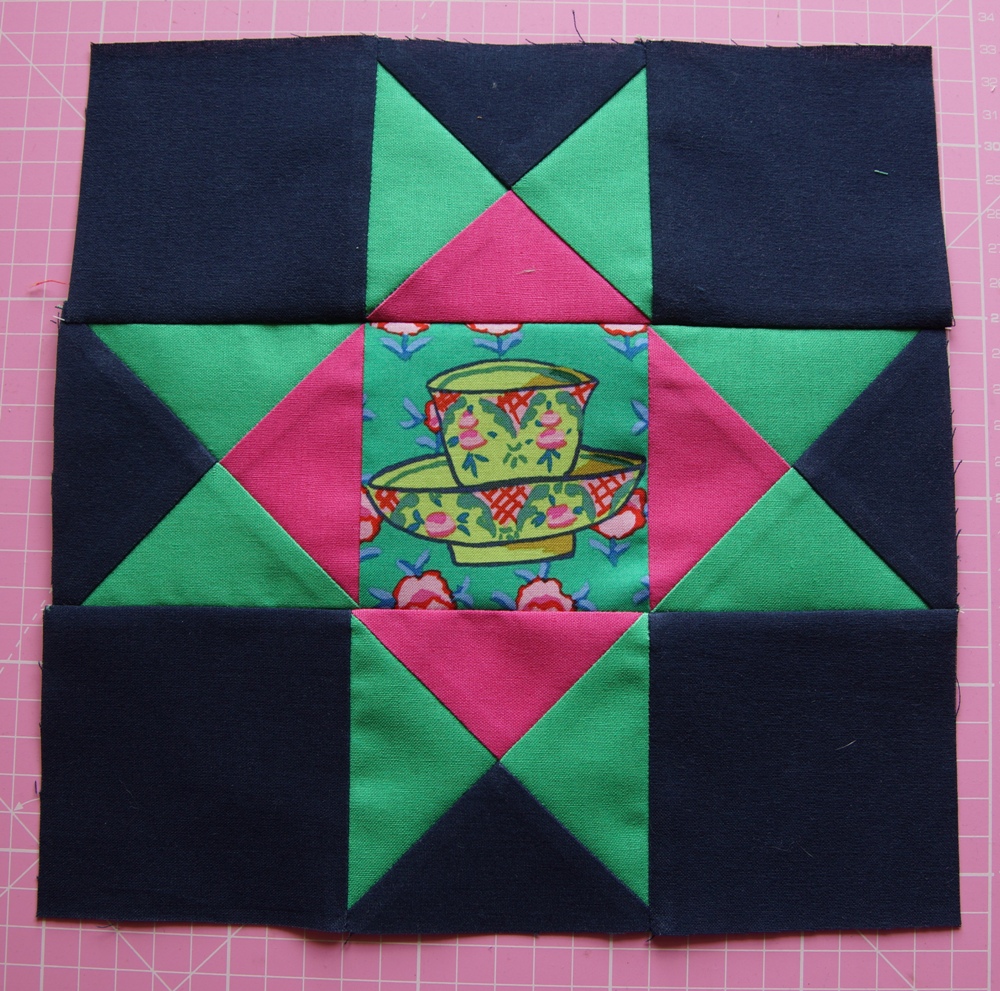 A couple of my points didn’t line up perfectly (there’s a lot of fabric coming together in those corners), so I did consider unpicking that last seam and trying again, but it won’t really be noticeable once it’s part of a big quilt, so I decided to follow the most important quilting rule of all: “Finished is better than perfect” 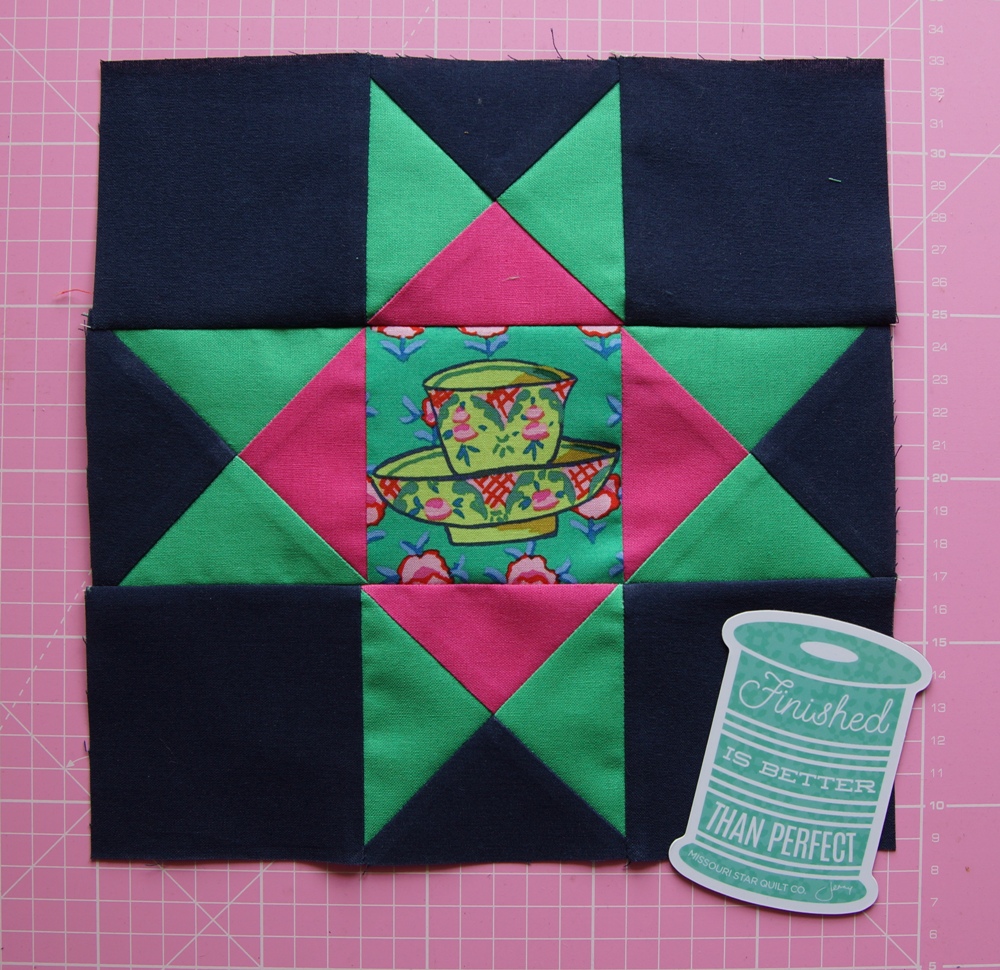 The fridge magnet was a free gift thrown in with my last order from the Missouri Star** Quilt Company, and lives on the filing cabinet next to my cutting mat – it’s a useful reminder sometimes, when I feel the obsessive perfectionism gene I inherited from Granny trying to come out – luckily it’s nicely balanced by my inherent laziness 🙂

(**There seems to be a star block named after every state in the USA (now there’s an idea for an overly-ambitious sampler quilt for someone!).  I’m sure a few more will end up in this quilt, though maybe not the Missouri Star – I think it might be a bit too complex to work well at this scale.  Maybe if I run out of simpler blocks…)