Finished making the nine-patches.  All 113 of them. 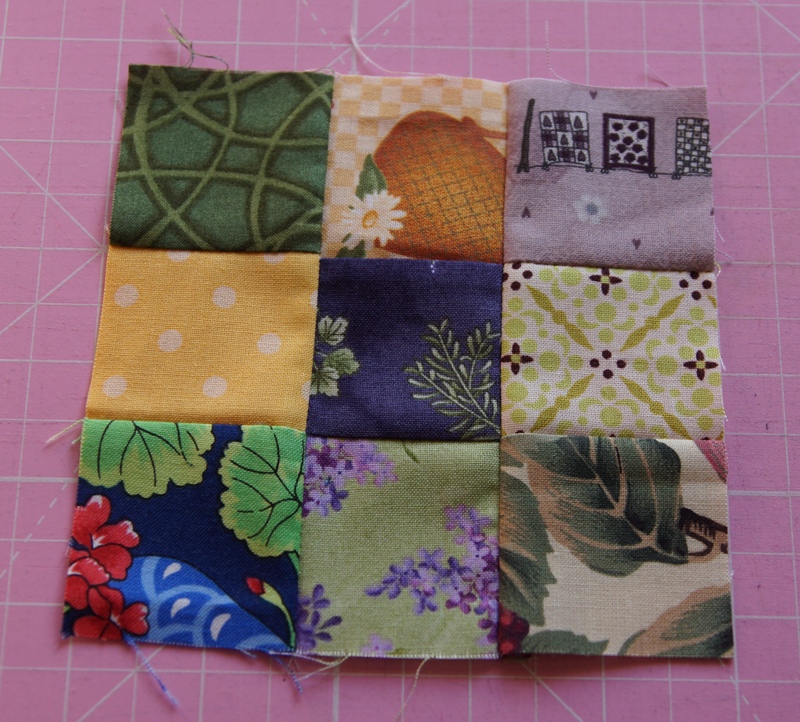 I’m slowly getting better at getting all the seams to match up with each other properly (nine-patches are very good practice for that!).

I haven’t got as far as actually sewing the blocks together (too much of a social life this weekend, going out to a Toastmasters thing last night, and then to a birthday party for one of the mini-Harvestbirds this afternoon), but I did stick them all up on the design wall just to see whether what I’d been imagining for the quilt would look as good in reality, and it does: 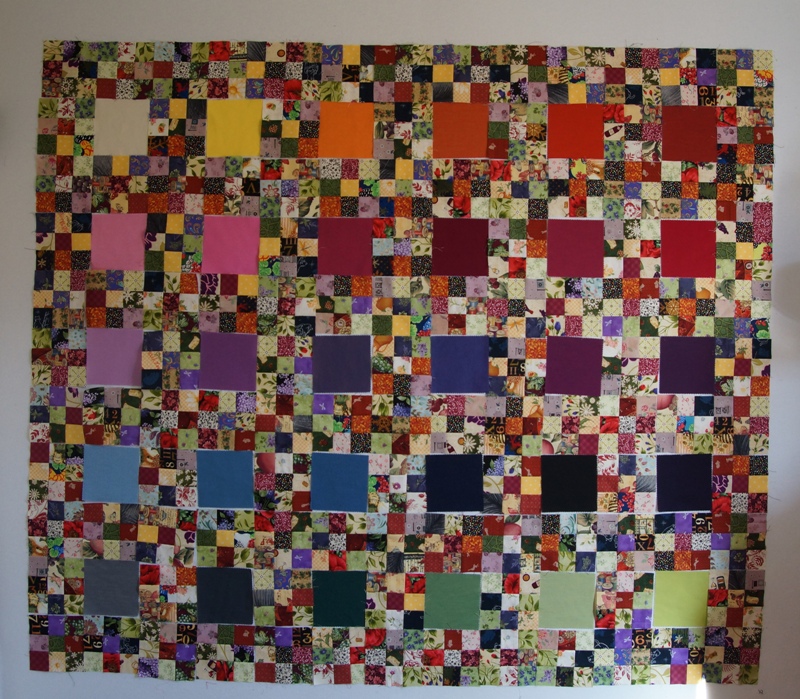 (Hmm, do you think mini-Harvestbird would mind if I skipped her birthday party in favour of playing with my quilt a bit more? …nah, probably should go to the party, shouldn’t I?)

Ages ago I asked Deb Robertson how she manages to produce so many quilts while juggling work and children, and she told me she makes a lot of use of those spare half hours at the beginning and end of the day, when you can sew a few seams, or cut a few pieces, even if you don’t have time to do much more.

Now that I’ve got the new sewing table, it’s a lot easier to leave a project set up mid-process, without it being in the way, so I decided I’d give her approach a try.  So in the evenings this week (I’m not organised enough in the mornings to find spare time to sit at a sewing machine!) I’ve been sitting down with the aim of just making a little bit of progress (rather than my usual approach of thinking of the project as a whole (or even each major step of it) as being something that needs to be completed all at once, so therefore needs a huge chunk of spare time to work on).

And it’s amazing how much I got done.  Ok, so a couple of those evenings I got so engrossed in what I was doing that I stayed up way past my bedtime, but given that I was out two nights this week, I think I did pretty well: 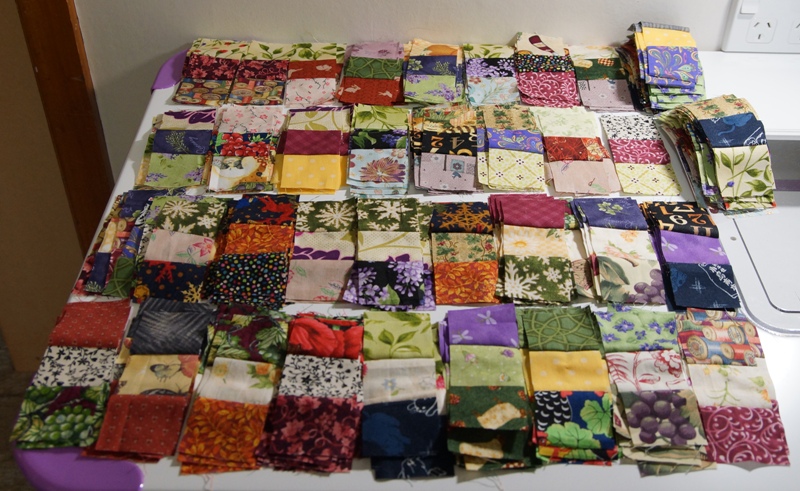 That’s 341 sets of three little squares (it was supposed to be 339, but I mis-counted at some stage so did a couple extra by accident), all cut and sewn together.  Ok, so I sewed a lot of them by making strip sets then cutting them up, which sped up the process a bit, but that’s still pretty impressive, I reckon!

Now I’ve just got to sew the sets together to get nine-patches (which is exactly what it sounds like: a square block of nine patchwork squares), and I’ll have all my blocks ready to start laying out the quilt design.

I may end up spending more than half an hour working on it this afternoon, though – I’m too impatient to see how it’s going to look!

I still haven’t made up my mind about the border for the Three Dudes quilt (which (prompted by Mum asking why it was called Three Dudes, and me realising that the answer was that it was based loosely on a quilt design that was based loosely on a quilt design that was originally called Three Dudes, so by now it is very far removed from the original concept!) I have decided to rename as the Cordon Fence quilt (because the criss-crossing of the dark strips reminds me of chain-link fencing, and because Christchurch)), I’ve set it aside to think about another day.  Which meant my sewing machine was sitting empty.  Which is a bad thing!

The first solution to this problem was to spend some time consolidating some of the blocks I’ve slowly been accumulating for my super scrappy left-over-bits-from-my-scrap-basket quilt, and start connecting them together into bigger strips. Suprisingly, my occasionally grabbing a handful of scraps and sewing them together added up to quite a bit of quilt: 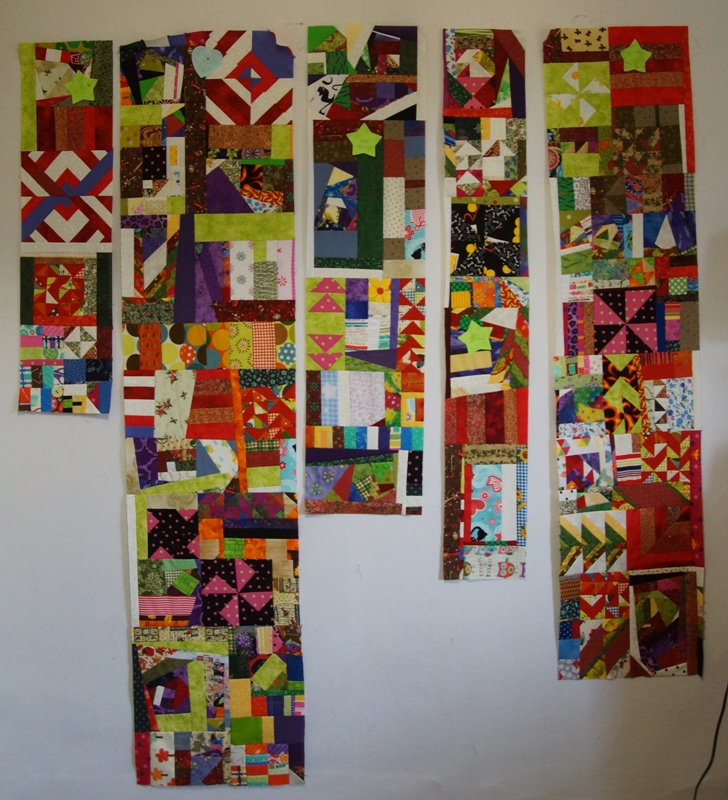 The longest strip is long enough to go the full width of a quilt, and the others are getting close. I’ll need twice as many strips to make up a full quilt top, but even so, that’s about a third of a quilt made so far, all from scraps I would otherwise have thrown away (plus a few sample blocks where I was testing out how an idea would work).

Hmm, I suppose the real message I should take from this is that patchwork is an incredibly wasteful process!

I also started a brand-new project (because having four unfinished quilts in the production line is never enough 🙂 ), inspired by a charm pack (i.e. a pre-cut set of 5 inch squares) of Oakshott fabrics I’ve had sitting in my stash since forever. I won them during TartanKiwi’s In Flight quiltalong, and put them aside because the fabrics, though just small pieces, were so nice that they deserved to be used in a project that highlighted them somehow.

Except I had no idea how to do that, so they’ve just sat there for the last couple of years, waiting on inspiration.  Which finally struck the other day, when I came up with an idea that (I hope) will show off 30 small squares of plain but colourful fabric beautifully.  So I spent a very enjoyable hour or so picking out a selection of patterned fabrics to add to the charm pack: 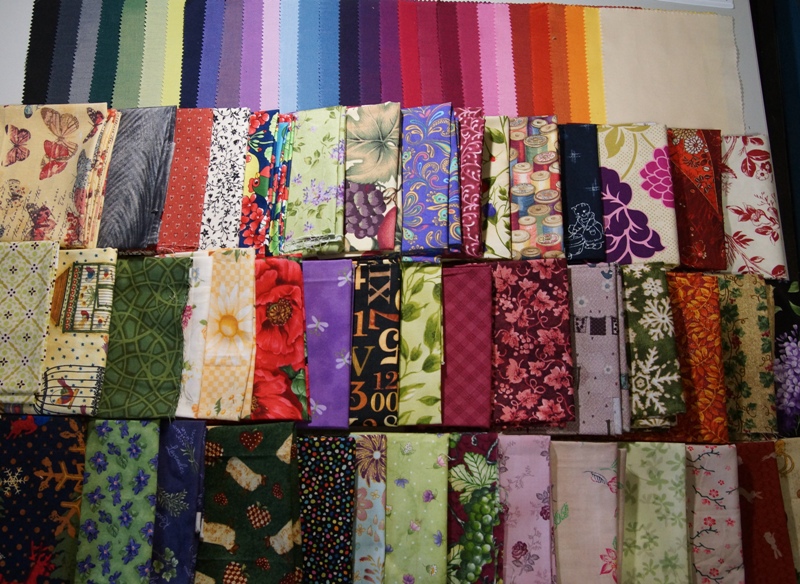 A very busy collection, but that’s the idea – the plan is they’ll provide a contrast to the plain squares, while keeping all the colours in roughly the same tonal range.

I’ve actually made a bit more progress than that on the project – I cut most of the pieces yesterday, and made a start on sewing the units together that will eventually make up the blocks.  But by the time I thought to take more photos, it was getting too dark, so you’ll just have to wait to see what I’ve got planned 🙂

In other news, work has been a bit stressful lately. On the plus side, I’m involved in a really exciting (and challenging! It’s definitely going to be stretching my coding skills!) project to produce a digital edition of a medieval manuscript. I’ve been sort of project managing/overseeing the project for a while, but not all that heavily involved in the actual work, but since Lucy-Jane left the lab, I’ve had to pick up a lot of the coding work she was doing, which is involving quite a steep learning curve (especially as it uses a language I’m not familiar with (both in the computer language sense, and in the human language sense, because the manuscript is in Latin! Although thankfully I don’t need to worry about that side of things – we have historians doing all the clever need-to-be-able-to-read Latin stuff, I just have to help make their work appear on the computer screen in the right way. Although I suspect I will have picked up quite a bit of Latin before we’re finished!)). So that’s something fun and juicy to get my teeth into.

On the minus side, a couple of days after Lucy-Jane left, Rosalee also put in her resignation. Not that I blame either of them for leaving – they’re both going to exciting new opportunities that they would have been mad to turn down (Lucy-Jane to a private sector programming job, Rosalee to work in social justice activism), but it’s suddenly dropped the Lab from three staff (plus the boss, who is teaching pretty much full time, so we don’t see much of him) down to one, and there’s no way I can pick up all of the work myself. Which puts the Lab in a bit of danger as to its long-term viability. Luckily the university has approved us taking on a couple of extra staff for the rest of the year (at the end of which my contract runs out anyway, so we’ll be having to make a business case to continue the Lab anyway), but it’s going to be tough getting them up to speed quickly enough that it doesn’t damage any of the projects we’ve got on the go.

The Word literary festival, by piggybacking on the Auckland festival, have been having an autumn season, basically bringing a few of the authors who were going to Auckland anyway down to Christchurch.  I’ve only managed to get to one of the events (they all sold out very fast!) – a reading/performance by Ivan Coyote (whose book was one of the ones I bought at Scorpios the other day).  It was a great night – their work manages to be incredibly entertaining while touching on some pretty deep issues.  I thought about staying for their book signing afterwards, but chickened out – I never know what to say to authors at signings, and end up just mumbling a vague “Hi, I think you’re great, please sign this” and rushing away, and then think of all the cool and articulate stuff I wish I’d said afterwards.  And anyway, the queue was incredibly long, so I was worried if I stayed I’d miss my bus.

Of course, the minute I left the venue, I was kicking myself that I hadn’t stayed, so I decided that when I got home I’d write them an email to tell them how much I’d enjoyed the show.  Which I did, and got a lovely reply from them!  Totally fan-squeeing here 🙂

(With apologies for the terrible photographs – I keep forgetting that the lighting in the study in winter isn’t particularly conducive to getting colour-accurate photos.  On the plus side, I have managed to reinstall decent photo-editing software, so at least I could crop and resize them without too much pain…) 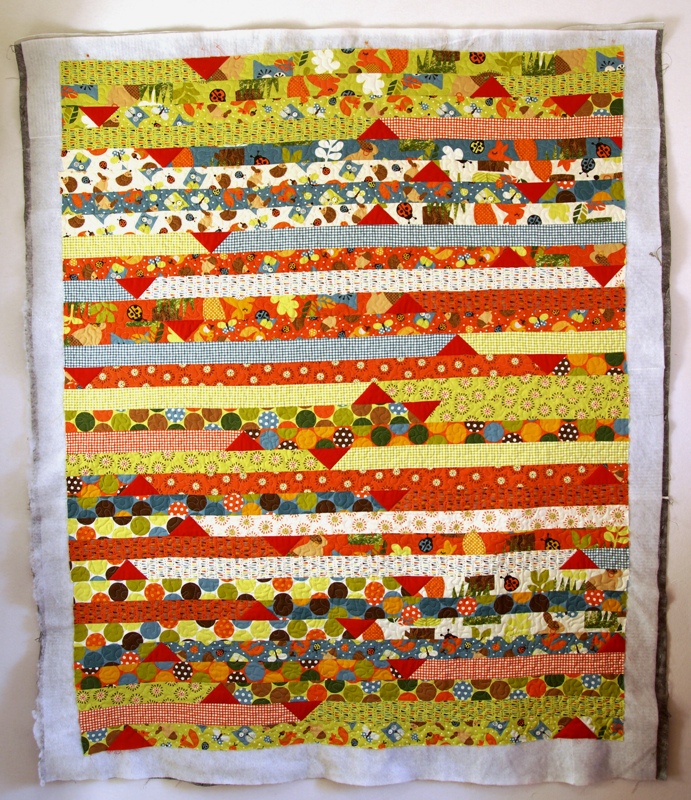 The jelly roll race quilt is quilted! Although the quilting doesn’t actually show up all that well in the photo. It looks pretty good in person though. So all I need to do is the binding, and it’ll be finished.

It’s the first biggish quilt I’ve quilted on my new table, and it’s definitely a lot easier moving a big quilt around on the machine when everything’s at the same level. Of course, because nothing is ever simple in my life, I’ve now run into a problem with the thread shredding when I quilt in a particular direction, which I’ve read can either be a sign there’s damage to the throat plate or the bobbin holder of my machine, or it can just be caused by using the wrong size needle. I really really hope it’s just the needle – if not, the sewing machine might be taking another trip back to the repair shop… (or I could just never quilt anything in that direction – might make curves a bit tricky, of course) 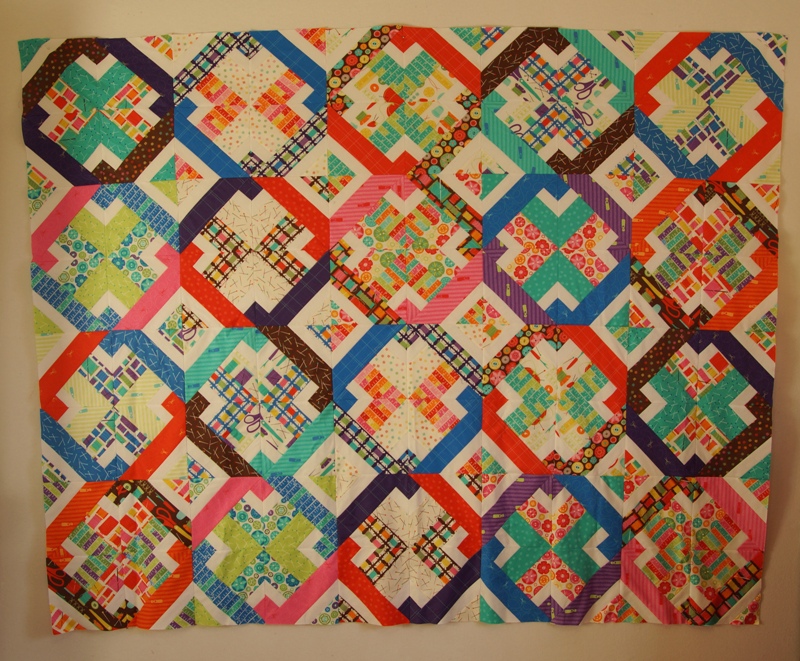 I also finished putting together the top for the Three Dudes quilt. Well, sort of finished it – I can’t decide whether I want to add a border to it or not. It looks a bit unfinished without a border, but if I do put a border on, I’m not sure what fabric to use (ideally, I’d use one of the fabrics in the quilt, but I can’t find anyone in NZ selling that fabric line, and the postage for buying it from overseas would be ridiculous). This is the disadvantage of using precuts for a quilt – if you add in some random other fabric that’s not from that fabric line, it’s really obvious.

This has been a really complainy sort of blog post, hasn’t it?